Believing that every person has the right to be supported in living a healthy, positive life, our mission is to reduce suicidal behaviour and its impact on individuals, family and communities.

Since July of 2016 Elisa Brewer-Singh has been the program coordinator for the Waterloo Region Suicide Prevention Council and brings to the role her passion for suicide prevention and a Master’s degree in Spiritual Care and Counselling from Wilfrid Laurier University.

Her work includes a focus on providing hope, help and healing for those who have been touched by suicide as well as the community. Prior to becoming program coordinator, Elisa volunteered with the Council facilitating both the open and closed suicide bereavement support groups as well as helping to organize an annual My Life Matters Day that focuses on resiliency and stress management strategies for high-risk youth.

Elisa’s desire is to see a reduction of suicidal behavior within our community and beyond through increased awareness and supports available.

Amanda began as the Program Coordinator for the Waterloo Region Suicide Prevention Council in March of 2018.  Her Master’s degree in Community Psychology, her passion for suicide prevention, and her lived experience of her own suicidal thoughts and behaviours shape the multifaceted perspective that guides her within this role.

Prior to becoming program coordinator, Amanda has worked mainly in research and education roles specializing in mental health promotion & suicide prevention, including working in post-secondary education, community mental health, public health, and community-based research, as well as serving as the Director for a local youth mentorship and supplemental education organization.

Chantalle is the Administrative Project Coordinator for the Waterloo Region Suicide Prevention Council. She graduated from the Child and Youth Worker program at Mohawk College in 2012 and has been working as a Child and Youth Counsellor at Lutherwood’s residences and day treatment programs since. During this time, Chantalle facilitated the Dialectical Behaviour Therapy Informed groups where youth are able to learn and practice coping skills.

Recently, she transitioned into her current role in the WRSPC with a determination to spread awareness and supports for suicide prevention. Chantalle is passionate about helping others and supporting those impacted by mental health and suicide.

The role of the Waterloo Region Suicide Prevention Council’s Panel of Advisors is to provide expert guidance and make recommendations on issues and services that affect the Council, its administration and the community.  The experts are independently called upon if there is a question or concern.

Bill Wilkerson – Co-Founder of the Global Business and Economic Roundtable on Addiction and Mental Health.

Bill Wilkerson is a former chief and senior business executive, sworn civilian employee of the RCMP and specialist in corporate crisis management and has received several national awards for his work in the mental health field.  Bill co-founded the Roundtable of Mental Health and Addictions in 1998 and in 2008 completed a 10 year campaign for mental health in the workplace releasing a final report the end of 2011.  In 2008, Bill was sworn-in a civilian member of the RCMP and appointed to help guide a health work strategy for Canada’s national police force working directly with the Commissioner of the RCMP and his senior officers.  Bill continues to be a sought out speaker across North America.

I lost my 17 year old daughter to suicide in 2005: Jaclyn Amy Brabazon was just a few weeks into Grade 12 when she decided to end her life on a railway line. Currently I am involved in still being there for Jaclyn’s older brother who is doing very well career wise and for my two young children from my second marriage, just five and eight years old. I also step-parent my wife’s two grown daughters. The message to other parents as to how to help teen boys and girls is so important as they can end their lives, and all that the future holds, based on limited life experiences. Teens tend to have a somewhat flawed view of what is truly important and unfortunately may not grasp the concept that good days always follow bad days in our lives.

I am currently employed by the Region of Waterloo as a technologist in the Water Department, working on water efficiency projects. My education includes a Diploma in the Laboratory Sciences, an Economics degree from the University of Western Ontario and an MBA from Wilfrid Laurier University. We currently reside on the west side of Kitchener and are very involved in supporting our young children in many sports and organized activities. When time allows, I volunteer and support the WRSPC in the hope that my time can help reduce the occurrence of suicide, and in particular teen suicide.

Tom Connolly worked for the Waterloo Region District School Board for 35 years in various roles. During this time Tom was the Coordinator for Trauma and Threat Assessment Teams, where he led the team of psychologists and social workers in response to severe trauma cases including suicide deaths and conducted over two hundred threat assessments. He was the main lead in introducing the Threat Assessment Model to Waterloo Region and today is a National Trainer for Threat Assessment and Trauma Response.  Tom has lectured for several years at the University of Western Ontario in Human Relations Training and at the University of Toronto for the Satellite Program — Provincial Guidance. Tom is a regular keynote speaker, guest speaker, motivational speaker, and topical speaker on a variety of issues. Target audiences have been conferences, professional development activities, community groups, post-secondary institutions, school boards and more. Previously Tom was on the Board of Directors for the Waterloo Region Suicide Prevention Council, as well as a member of the Board of Directors for the Junior Achievement of Waterloo Region.  He has been formally recognized for his contributions by the Waterloo Region Police, Mayor of Waterloo, the Waterloo Region Suicide Prevention Council, and in 1996 was awarded the ‘Educator of the Year award in Waterloo County. Tom was also awarded the Outstanding Leadership Award in the field of Violence Threat Risk Assessment at the 2015 National Conference in Banff.  The award was presented for outstanding leadership in the development, implementation, and ongoing support of Community Violence Threat Risk Assessment and Intervention Protocols.

June 1995, a group of over 80 concerned community members and agencies held a meeting to focus on suicide prevention and mental health issues.  Committees were developed and in 1997 the Waterloo Region Suicide Prevention Council was established.

The Council continues to grow, and is now recognized locally and provincially for suicide prevention activities.

The WRSPC is a non profit, voluntary council comprised of 20 representatives from Waterloo Region. The WRSPC strives to maintain equal representations from professionals/organizations dealing directly with suicidal behavior, associated professionals (faith community, teachers) and the community (family, friends and individuals affected by suicide).

The Council promotes a community wide strategy to reduce the incidence of suicidal behavior through public awareness, education, skill development, and public health advocacy. The Council strives to reduce the impact of suicidal behavior through the improvement of services, collection of local statistical data and through community consultation, co-ordination, and collaboration.

Without the generous, community-minded spirit of our sponsors, partners and friends past and present, the WRSPC would not be where it is today. 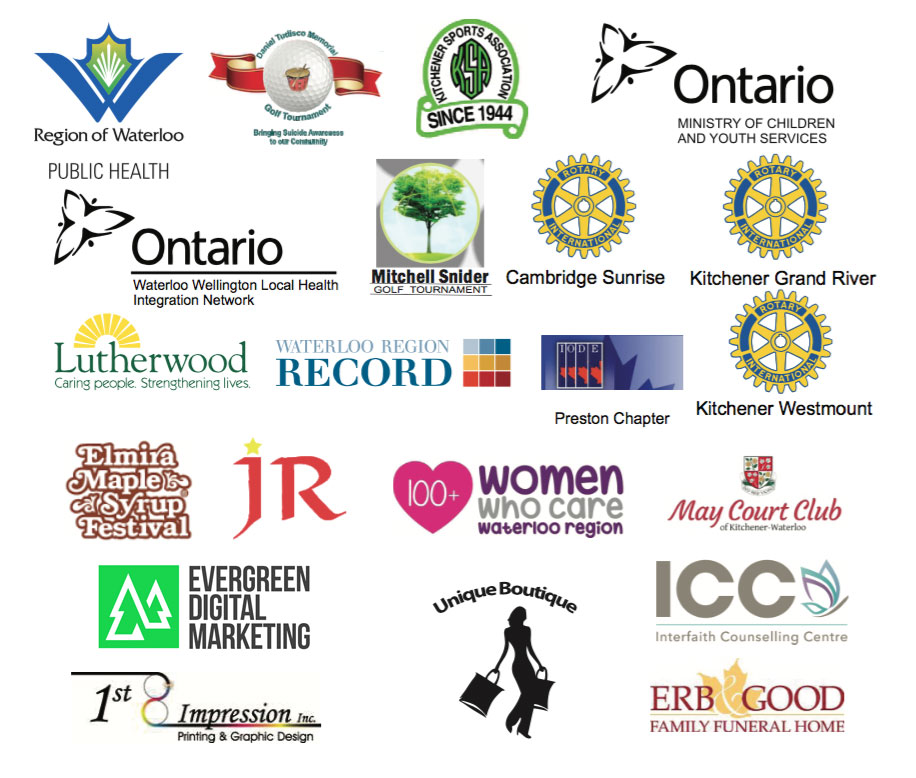 Please note, the WRSPC does not provide counselling or crisis support. For access to mental health, addictions, and crisis services in Waterloo Region call:

Make a donation to support the work of WRSPC in our community.

We're not around right now. But you can send us an email and we'll get back to you, asap.